The Grizzled Skipper in Nottinghamshire.

For the last three years, the project has continued due to funding from the membership of the East Midlands Branch of BC and officer support from the County Council’s Biodiversity Officer.

The funding has helped to pay for site management operations at sites that are either known to support Grizzled Skipper (or have had Grizzled Skipper reported from them in recent years), or areas of potentially suitable habitat near known sites.

The project aims to strengthen existing populations at sites where the butterfly currently occurs by enhancing or expanding the habitat present, and to increase the linkages between these sites, to encourage the interchange of individuals between sites, and to allow the colonisation of new sites.

Since 2011 work has taken place at seventeen sites. The initial work focused on scrub management undertaken by contractors, and consisted mainly of removing scrub that was invading the open habitat favoured by Grizzled Skippers. In recent years this work has continued with volunteer work parties maintaining the areas that have been opened up. In addition work has been undertaken at some sites to create enhanced egg-laying habitat.

In 2014, the East Midlands Branch of BC was successful in securing more funding for the conservation of Grizzled Skipper in neighbouring sites in northern Leicestershire. Once again work focused on opening up and maintaining areas of suitable habitat.

As well as practical works on the ground, the project has also sought to encourage and better co-ordinate surveys for Grizzled Skippers at known and potential sites in the project area, and to raise awareness locally of the species and its conservation. 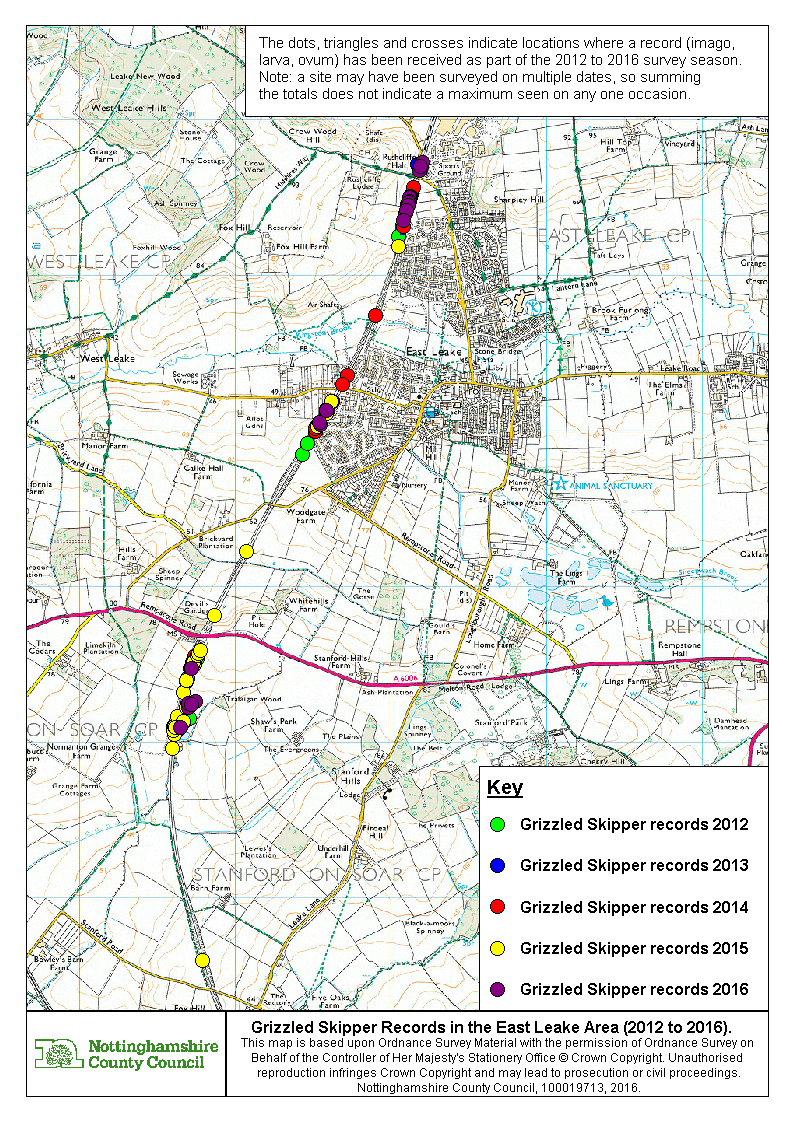 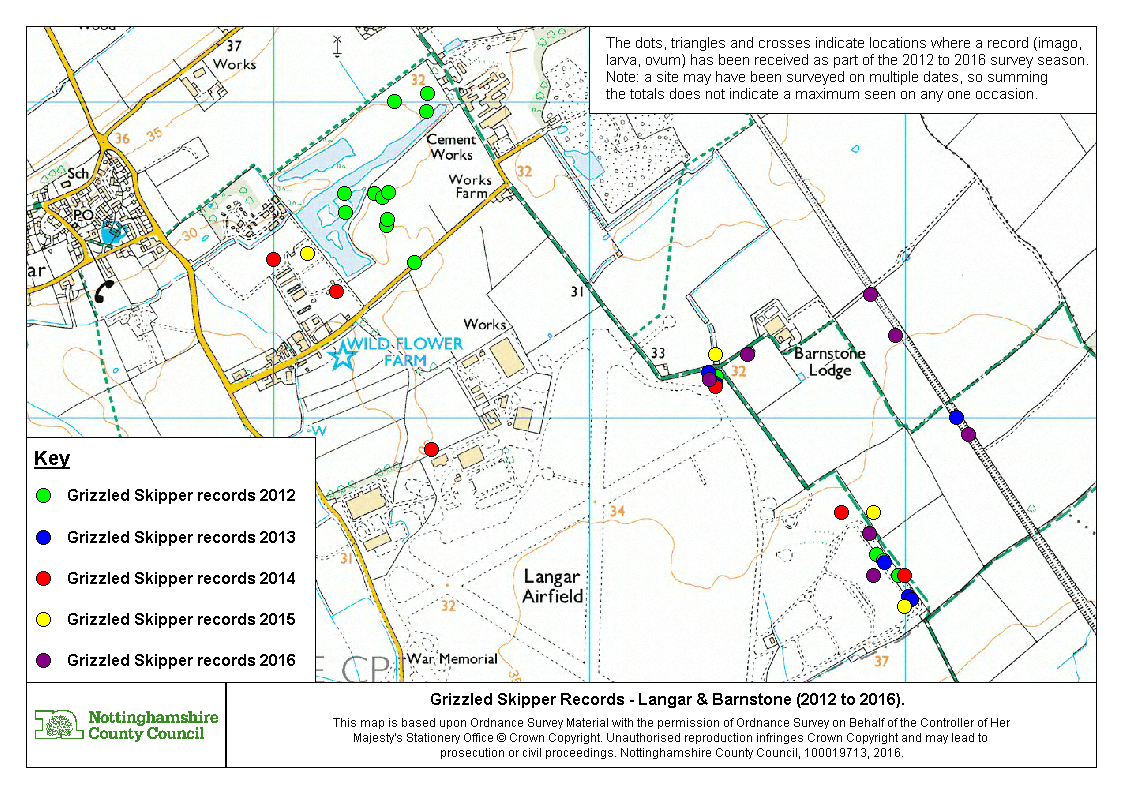 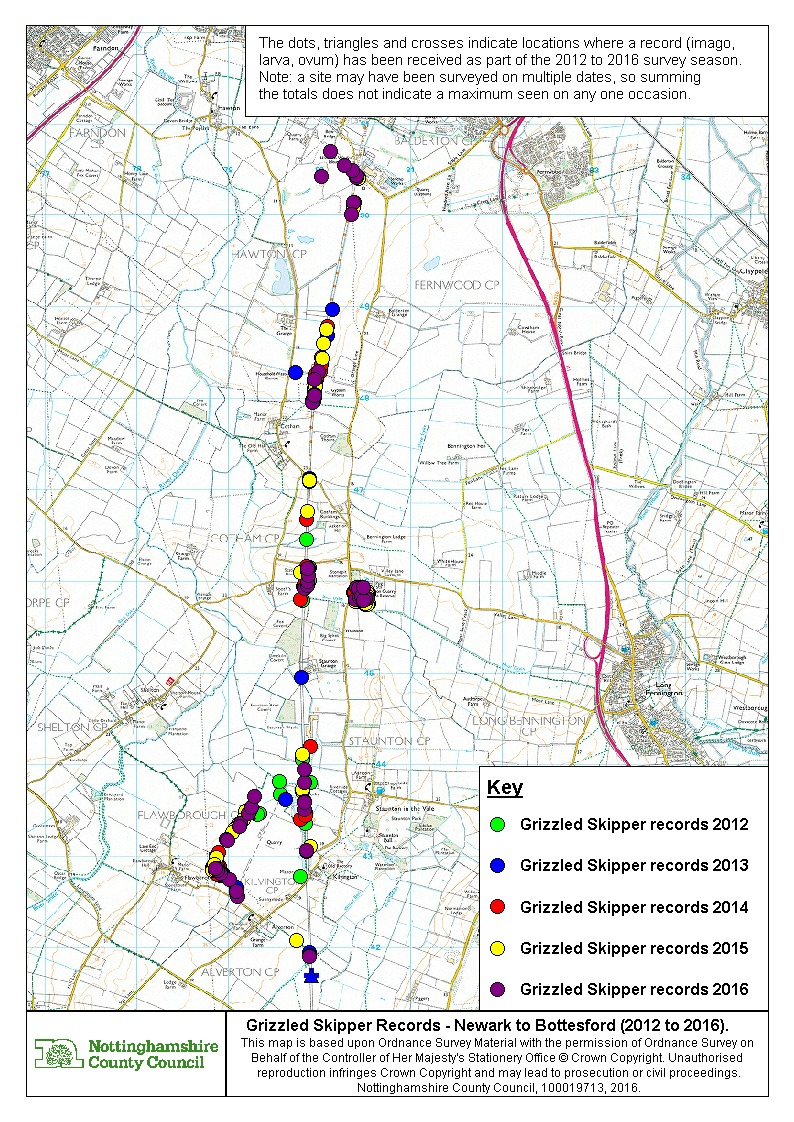 To this end, an informal recording group was set up via email, which was very successful, alerting people as to when the skippers first emerged. Since the group was set up in 2012, it has generated a total of 471 records at 25 sites (including several new ones). These records have included some new sites and improved our knowledge of the Grizzled Skipper distribution in Nottinghamshire. Since 2012 we have discovered that the species is present at locations further north than previously known, with populations discovered on the urban fringes of Newark. In addition a population has also been found at the southern end of the Great Central Railway near to Stanford-on-Soar. So perhaps there may be Grizzled Skipper populations just north of Loughborough in Leicestershire too? Maps showing the locations of all Grizzled Skipper records received since 2012 are shown at the end of this update.

Five training days have also been organised by Nottinghamshire County Council, aimed at local people. These consisted of an indoor session run by Bill Bacon, Butterfly Conservation, providing some background about the Grizzled Skipper (ecology, conservation and identification), and an afternoon field trip, attempting to see them in the flesh. The majority of training courses have proved very successful and as a result we have been able to increase the number of records received annually by some way. In addition we have increased the number of individuals going into the field and reporting their sightings (see chart below)

In the future it is hoped that through the partnership work coordinated by the Nottinghamshire Biodiversity Action Group and by working with private landowners we will be able to continue the work to maintain and enhance suitable areas of habitat for the Grizzled Skipper. The results and success of this work will be seen through the enhanced monitoring system that has been set up in recent years.

Habitat management and enhancement works have been completed at 16 sites across the project area, the works carried out include:

Surveys in 2012 and 2013 identified potentially suitable habitat for grizzled skipper on a number of sites within the project area, and it was decided to bring these into the project to replace the deleted sites (see below).

The following sites were part of the original project proposal, but for various reasons, had to be removed as the project progressed:

As well as practical works on the ground, the project has sought to encourage and better co-ordinate surveys for Grizzled Skippers at known and potential sites in the project area, and to raise awareness locally of the species and its conservation. To this end, an informal recording group was set up via email, which was very successful, alerting people when the skippers first appeared.

Surveys in 2012 generated a total of 94 individual records at 22 sites (including several new ones), with some very notable counts made in what seems to have been an exceptional year for this species. Surveys in 2013 generated 65 individual records at 20 sites. Maps showing the locations of all Grizzled Skipper records received during 2012 and 2013 can be viewed on Nottinghamshire Biodiversity Action Group’s website at: http://www.nottsbag.org.uk/projects.htm.

It is envisaged that this co-ordination of surveys by Nottinghamshire Biodiversity Action Group and Butterfly Conservation will be continued beyond the end of the funded project.

Success of the Project

The project has delivered significant amounts of habitat management and creation on sites used by, or with the potential to be used by, Grizzled Skippers. Early indications are that suitable habitat for this species is already redeveloping in many areas, with creeping cinquefoil (the larval foodplant) appearing in abundance in some areas cleared of scrub. Furthermore, at two sites, Grizzled Skippers have already made use of restored areas of habitat, within a few months of work taking place; at Flawborough footpath, Grizzled Skipper eggs were found on cinquefoil growing in an area cleared of scrub the previous winter, and on the Bingham Linear Park, eggs were found on cinquefoil trailing over one of the new ballast piles, around 600m north of recent records of the species at the site. On that basis, it is expected that works elsewhere will prove to be very beneficial, but ongoing monitoring work will be used to confirm this.